The colleagues of the Research Centre for Multilingualism of the Research Institute for Linguistics were greatly saddened and grieved by the news that Iván Vasák passed away at the age of 75. He was a former general secretary of the Hungarian Association of the Deaf and Hard of Hearing, fighting for Deaf people’s right to their mother tongue, for the ratification of Hungarian Sing Language. He initiated and spearheaded the struggle that has been going on for decades for bilingual education. He was a champion athlete and sports leader. His passing away is a huge loss to the Hungarian and international Deaf community, to the world of sports, to the experts of sign language research and education.

He was among the first Deaf rights activists, who contributed to the identity shaping process of the Hungarian Deaf community, raising awareness to Deaf rights and strengthening them within the community and in society as a whole. He fought alongside Deaf and hearing people for the cause with great faith and perseverance, step by step, or by applying radical solutions when necessary, to ensure the visibility of the marginalised and to advocate for them, to shed light on the political and societal responsibilities. He has worked tirelessly for years, his efforts manifested in the proposal and ratification of the Sign Language Act of 2009. He initiated the research of Hungarian Sign Language and published fundamental books, such as Theory and methodology of sign language, About the Deaf, or The world through the Deaf perspective. With an unquenchable thirst for knowledge and understanding he continuously searched for the place, roles and tasks of his community.  He learned continuously, received a degree, redefined his and the association’s responsibility and role with regard to Deaf history, culture, the Deaf and the hearing world, and the Deaf-integrated in-Hearing and Hearing-integrated in-Deaf world. He fought especially hard for Deaf children’s future, opportunities, education, the nurturing of their talents, sports. For his Deaf brothers and sisters.

Iván Vasák was a pioneer. His understanding on what it is “to be Deaf”, his thoughts were innovative, modern, complex, and reflexive. The foundation of his critical understanding was rooted in a life well lived from within, a visual perception of the world, a culturally natural, complex yet diverse Deaf identity that is rooted in shared history, traditions, activities, and communicational modes. His approach reflected his knowledge on both the Deaf and the hearing world, the naturalness of equal opportunities and mutual acceptance, and another cornerstone: sign language and its use as the most natural and innate source for Deaf people in the same way and with equal rights to the spoken language use of hearing people.

He made his final reckoning a couple of months ago:

“I consistently fought for the recognition of Sign Language as a real and independent language. In my work, I emphasised the cultural importance of Deafness, highlighting our belonging to a language minority, rather than the disability aspects pertaining to deafness. It was a struggle, but I successfully managed to organise water polo at the international level, and contributed to the development and continuation of the Deaf sports community.”

This consistent – slowly becoming gentler from year to year – fight defined his work philosophy. The Research Institute for Linguistics, and colleagues that later founded the Research Centre for Multilingualism have worked with Iván Vasák since the beginning. With his help and support the world of research learned how to involve stakeholders as equal partners in mutual learning, and in cooperative, socially responsible research. Two decades ago they imagined and developed the foundations of bilingual education of Deaf children together (the word “bilingvális” was kept as the official term to honour him). It is an efficient model that builds on full accessibility and interoperability between worlds, experts worldwide have thought of similar models.

With Iván Vasák’s passing, we have lost a brilliant expert, a fellow warrior, a role-model true to his beliefs. It is with deep sadness and a heavy heart that we say goodbye to him and share the grief of his family and the Deaf community.

On 10th of May 2018, the Research Centre for Multilingualism team held an informative professional workshop within the framework of the Languag-E-Chance Educational Research Group’s project – Development of language conscious school, bilingual deaf education and innovative methods and tools of knowledge exploitable by language. The colleagues of the Hungarian Association of the Deaf and Hard of Hearing and the secretaries of its country-based units participated in the event. The aim of this informative workshop was to present the main works of the Research Centre for Multilingualism – especially the current EFOP project titled Development of an accessible infocommunication service platform for persons with hearing and visual disabilities (2018–2019), and the Languag-E-Chance Educational Research Group’s project (2016–2020) – and the previous TÁMOP SIGNificant Chance Project (2013–2015). At the workshop Csilla Bartha, Péter Zalán Romanek, Margit Holecz and Anna Nagyné Kiss gave presentations on some aspects of the works done during the projects. After the presentations Zoltán Tarr introduced the studio of the research centre, the works being done there, and the participants were able to have a look at the finished materials as well.

Dr. Ágnes Hámori, colleague to the Research Centre for Multilingualism, gave a plenary lecture on the 24th of May 2018 at the conference titled “The process of mother tongue acquisition after the age of 3” organized at Eötvös Loránd University, Faculty of Humanities. The title of the lecture was “Pragmatic competence and metapragmatic awareness of six-year-old children”, and dealt with linguistic awareness and metalinguistic reflections of children and their correlations to social play, conversations and joint attention, within the framework of the MTA-NYTI Languag-E-Chance Educational Research Group. The study of the connections between metalinguistic reflections, conversations, awareness and the joint attention is also important as basic research, but the lecture has also made important and directly applicable statements for kindergarten and school education, for the teachers, parents and special education teachers – with an audience of numerous interested: linguists, teachers and special education teachers. 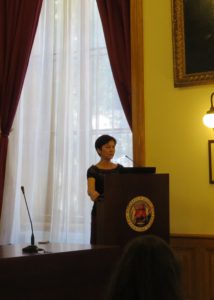 Mark Rust has spent three months in Hungary as a guest professor at McDaniel College in Budapest. During his stay, he honoured us with a visit on 22.05.2018.   The professor is a child of Deaf parents, and he is dealing with American Sign Language (one of his mother tongues). The three hours long visit was spent with the exchange of ideas in a good atmosphere. We presented our projects and aimed to find common ground between our research areas and the professor’s, mainly focussing on the areas of corpus building, language assessment and the development of terminology. We hope these were the first steps of an active and fruitful future cooperation. 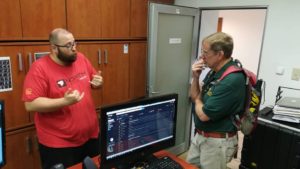 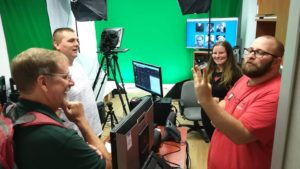 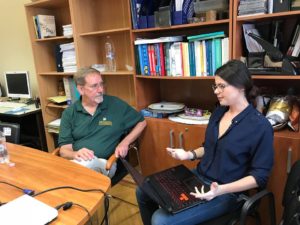 The conference titled Methods, Patterns and Linguistics- Presentations within the framework of the New National Program of Excellence took place at the Research Institute for Linguistics on 15 May 2018. Our colleagues had the opportunity to present their research during the afternoon session.
The audience could see the following presentations: Between two methods: Deaf education teachers on bilingual education and its implementation by Julianna Bokor; Supporting knowledge for real chance: Opportunities concerning Cochlear implants by Margit Holecz and Us and them: The manifestation of thematising otherness by Dorottya Tücsök. 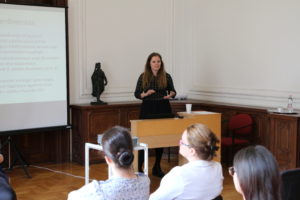 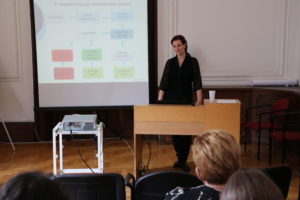 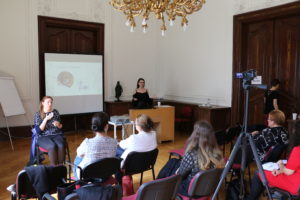 The mayor of Geresdlak, a multilingual settlement in Hungary, has received a prestigious Finnish state award

The president of Finland has awarded a prestigious insignia of the Order of the Lion of Finland to dr. Tibor Habjánecz, mayor of Geresdlak, a German speaking settlement in Southern Hungary with a high number of Finnish inhabitants. Mr. Habjánecz has contributed extensively to the furthering and strengthening of the Finnish-Hungarian relations. Borbála Pachné Heltai, colleague of our research centre, wrote her doctoral dissertation on the linguistic diversity of the settlement. The insignia was handed over by Petri Tuomi-Nikula, ambassador of Finland in Hungary, on 17th May 2018 at the Embassy of Finland in Budapest. Our warmest congratulations!

Cochlear implantation was the focus of the round-table discussion organized on the 8th of
May 2018 at the Eötvös Loránd University. The purpose of the round-table discussion was to
give information about the operation of the cochlear implant and to highlight the opportunities
and the possible limitations provided by the device, as well as to provide information on the
effects of cochlear implant wearing on everyday life. During the conversation the implanted,
family members and professionals shared their thoughts and talked about their own
experiences.
The event was funded by the New National Excellence Program coded ÚNKP-17-3 of the
Ministry of Human Capacities, linked to the work of MTA-NYTI Languag-E-Chance
Educational Research Group. 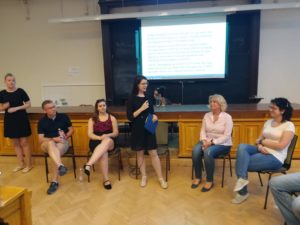 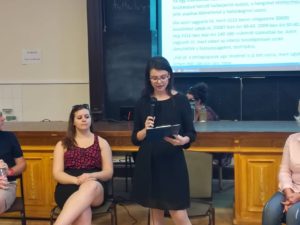 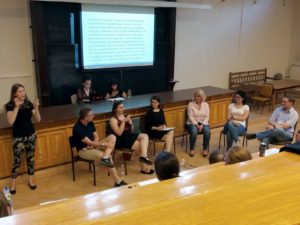 On educational issues from Finnish perspective

On the 3rd of May we had a meeting on the actual challenges of the Languag-E-Chance Project with Jukka Sinnemäki, member of our research team. Jukka works as a primary school teacher in Finland. We discussed aspects of using digital devices in school context, cooperation possibilities between teachers of different subjects, methods for motivating children and also the relationship between lifestyle and school success. Thank you Jukka again for your inspiring visit! 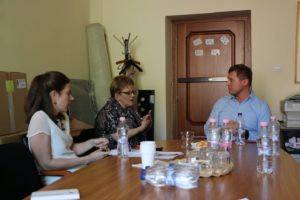 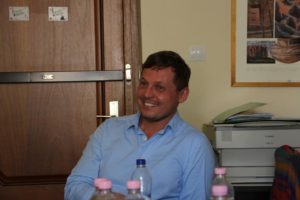 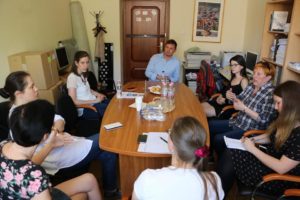 On 28th of April 2018, on the third day of the eighth Budapest Visual Learning Conference, Csilla Bartha and Péter Zalán Romanek gave a presentation. It is an honour for the Research Centre for Multilingualism that the presentation could be delivered by our colleagues instead of, in memory of Professor Franz Dotter, who has passed away tragically. The basics of Professor Dotter’s work are common to the values we represent, therefore it was taken into account by our presentation. „Rethinking linguistic patterns of the Hungarian Sign Language: What Do the Deaf’s Viewpoints Tell Us about Their Perception?” was the title of the presentation in which the focus was on presenting two rethought phenomena of the bilingualism of the Deaf. 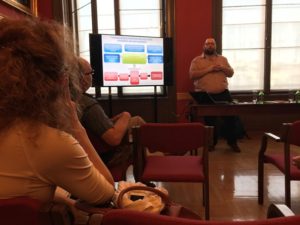 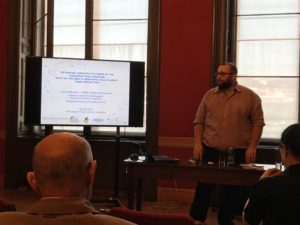 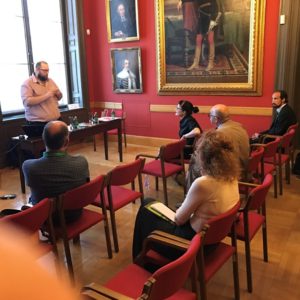 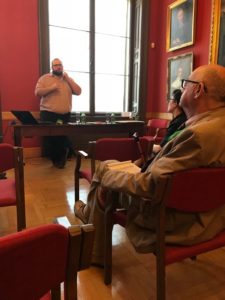 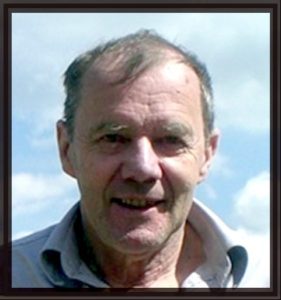 The Research Centre for Multilingualism has learnt with shock that Professor Franz Dotter (1948-2018), who is the expert of sign language studies at the Alpen-Adria University in Klagenfurt, passed untimely away last Friday due to a tragic accident. Professor Dotter had an extraordinary role in the development of the sign language research in Europe and in the fight for the linguistic rights of Deaf children. He contributed to the government level approval of the Austrian Sign Language Act and the use of Austrian Sign Language in Deaf education in Austria. Our Research Centre had a long professional relationship with Professor Dotter and the research group led by him. We had known him as a humble, frank, ever smiling person who had a professionally highlighting role at all times. In the world of sign languages, language sciences, Deaf communities he left behind a vacuum which will be hard to fill. The Research Centre and the Hungarian Deaf Community share the loss and grief of the family and the Austrian Deaf Community.